'And that's not just undermining Democratic institutions, that is treason. It's treason pure and simple and the penalty for treason under the U.S. code is death.

That's the only penalty, the penalty on the Constitution is the removal of office and that might look like a pretty good alternative to the President if he could work out a plea deal.'

There appeared to be audible gasps in the studio as Weld made the remarks during a joint interview with two other Republicans challenging Trump for the GOP nomination, former congressmen Joe Walsh and Mark Sanford.

Trump has sparked controversy amid questions about his alleged pressuring of the Ukrainian government to investigate former Vice President Joe Biden's son Hunter Biden. On Sunday, Trump acknowledged having a conversation with the Ukranian president about Biden but said their conversation was appropriate. 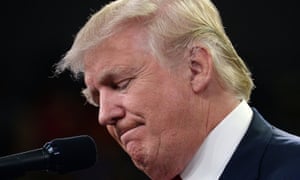 Journalist Andrew Feinberg pointed out that what Trump is accused of doing with the Ukranian government was likely not treason under the U.S. code, as an act of treason would require the United States to be engaged in war or actively aiding an enemy.

The three challengers face long odds in their quest to challenge Trump. Several state Republican Parties have canceled their primaries in 2020 in an effort to support Trump and avoid controversy in the nomination process, and Trump's approval rating among Republicans was about 91% in a recent Gallup poll.

MSNBC cuts from Trump speech: 'We hate to do this, really, but the president isn't telling the truth' News 3 months ago
ARTICLE